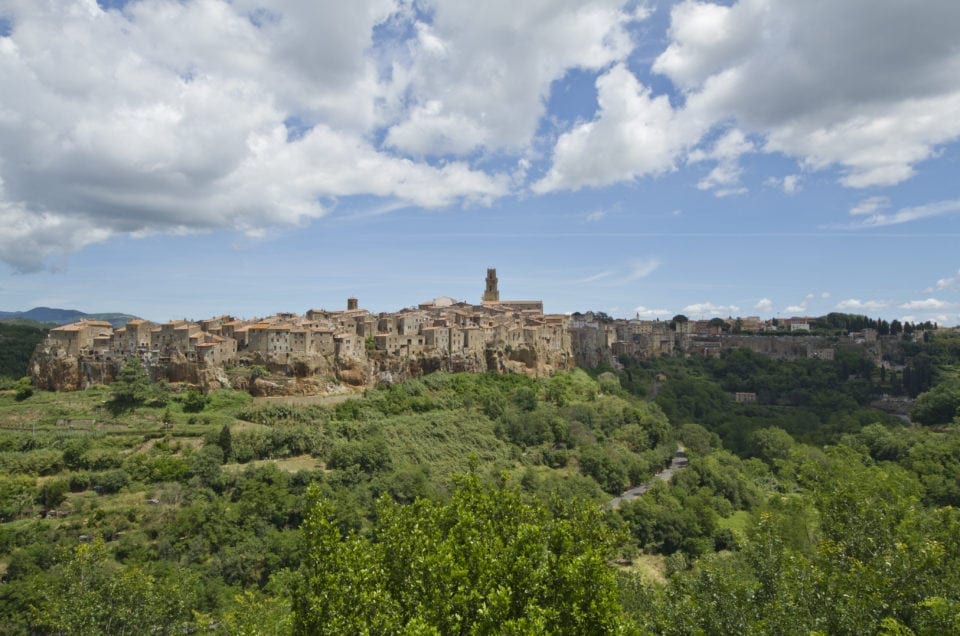 Once called “the little Jerusalem” because of its big Jewish community, Pitigliano is in the province of Grosseto and it has a population of about 4,000 inhabitants. The Fortress, Palazzo Orsini and a small early-Christian temple can be visited in the town.

The origins of the village date to the Etruscan and Roman times and it seems that a “vicus” had previously existed at the time of the Lombards with the name of “Torianu.” Yet, the only reliable news dates to 1061 and refers to a papal bull by Niccolò II which confirmed the bishop of Sovana its “potestà” on the parish of Pitigliano. More information is traced back to two centuries later, when there were of the counts Aldobrandeschi, who were fighting against the town of Orvieto.

After the division of the Aldobrandeschi family into several branches, the territory of Pitigliano was assigned to the one of Sovana. In 1239, the Orsini arrived. They transformed Pitigliano into the centre of control of their vast properties until the half of the XV century, when they drove Orvieto and Siena away. Only in 1445, this family surrendered to the Sienese war power and reduced their dominions to the fortresses of Pitigliano and Sovana.

The authority of the Orsini was completely overwhelmed by a popular revolt in 1562 which allowed the Medici to get possession of the town and to annex it to the Grand Duchy of Tuscany. Then, the town became part of the Kingdom of Italy in 1860. Pitigliano was at the centre of a strong rural movement of protest in the first years of the XX century before the advent of Fascism and it caused the occupation of uncultivated lands at the apex of the uprising. This movement was the forerunner of the Partisan movement that fought against the Nazi-Fascists some years later during the occupation of 1944.

One of the prides of Pitigliano is the history of its Jewish community. It was born at the time of the Orsini after the persecutions carried out by the State of the Church and by the Grand Duchy of Tuscany in its territories. Bankers, doctors and many other people found refuge in small feuds such as Pitigliano, Santa Flora and Castellottieri, where they can work freely. The Jewish community also founded a Synagogue in Pitigliano in 1598.

More and more Jewish citizens emigrated towards Pitigliano since they were confined in the ghettos at the time of extension of the Grand Duchy. In the XVIII century, thanks to the “enlightened” reforms of the Lorraine some of them also participated to the administration of the town, which they were previously forbidden to do. The Jewish presence in the town was so rooted that in 1799, after the French occupation, an authentic uprising of all the inhabitants of Pitigliano prevented the Napoleonic armies from pillaging the Jewish ghetto. The Jewish community consisting of few people today commemorates this event every year.