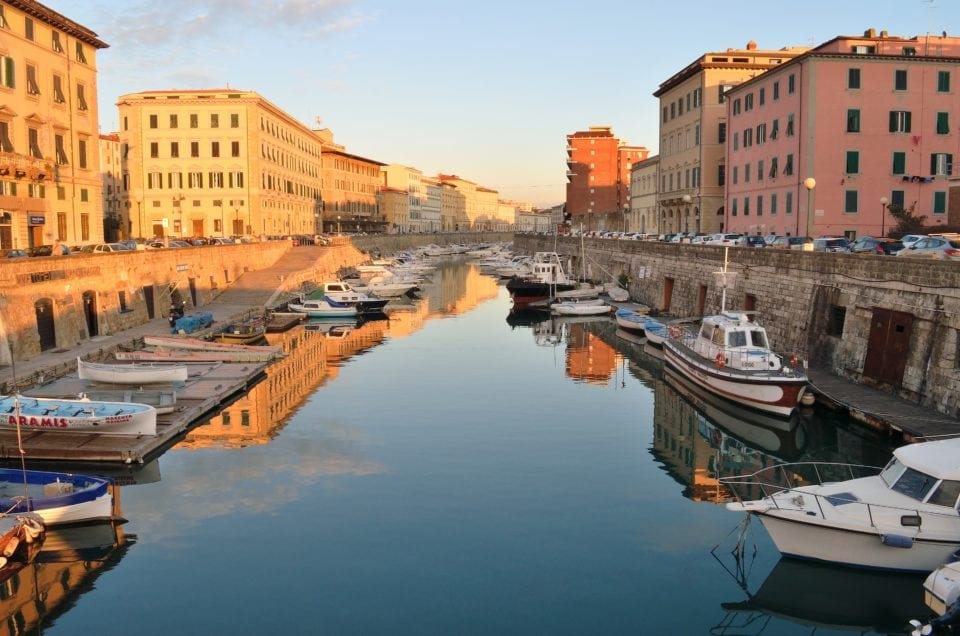 The city of Livorno is located on the Tirreno sea, a few kilometres at the south-east of Pisa, at the southern border of the plain which from the left shore of the Arno river reaches the hills of Montenero.

There are three hypothesis more reliable on the foundation and origin of the name of the city; in the first case, Livorno would have been founded by the King of the Molossi, Ligurian and by translation the centre would have been called Ligura and then, during the time it would have evolved into Livorna and at the end the nowadays Livorno; the second hypothesis gives the paternity of the city to Tirreno, King of the Lidi.

Cicerone, finally, talks about a dock, called “Liburna”, presumably because of the fact that it should have been adapted to host some famous boats such as “liburne” or “liburnie”, but he also talks about the port of “Labrone”, which are constituting, with good probabilities, the places of the first settlement of the city of Livorno as well as the etymologic roots of the name itself.

During the first centuries after Christ the inhabited settlement occupying this area remains in a position of absolute second importance with respect to the port and to the city of Pisa, of which is divides the destinies during the development and the successive dissolution of the Empire of Rome. After having supported the sacks of the barbaric hordes that are entering always deeper in the peninsula: the Goths, the Longobardi and around the middle of the 7th century the Francs, it is necessary to wait until the 11th century to see in the settlement, led by the countess Matilde, Marchioness of Tuscany, the edification of a symbol of a civil structure: the tower known under the name of “Mastio of Matilde”.

Livorno, still at the centre of a malarial and unhealthy territory which were certainly not making it a lot tempting with respect to other Tuscany medieval centres, still remains under the political influence of Pisa still during the first centuries of the second millennium after Christ.

After the defeat of the fleet of Pisa against Genoa during the battle of 1284 AC at the rock of the Meloria, and a short period under the control of the Marquis of Massa, Livorno first comes back under the control of Pisa, then together with this last one it suffers the hegemony of Genoa which in 1421 AC sells it for 100000 ducats to Florence.

In parallel with the decline of the port of Pisa, due to the silting up of the drawings alongside the quay because of the materials carried away downstream by the Arno river, Livorno undergoes a constant development under the careful and circumspect management of the family Medici. First the towers in garrison of the port are restored, then the defensive and port structures are reinforced, finally, the architect Buontalenti designs its urban prospect on the basis of a pentagonal plan.

In 1496 AC the city is the protagonist of the fights involving on one part Florence and Charles VIII King of France and on the other part the alliance unified around the Pope and which includes the main part of the Tuscany cities, the Duke of Milan and the forces of the Imperator of Germany Massimiliano I. Thanks to the obtained victory, the family Medici starts to consider Livorno as its favourite maritime market on the Tirreno sea, so that it orders the construction of the Arsenal in the Darsena, to build a new faro, to get the structures of the pier and the digging of the canal of the Navicelli ready.

The important demographic increase, that will take the population to be roughly estimated to 30000 unities already in 1736, follows the declarations of Cosimo I and the Constitution of Livorno made by Ferdinando I that turn the city into a port franc for everybody, guaranteeing fiscal exemptions, liberty of cult and of commerce. Under the Grand Duchy of Lorena and the leadership of Francesco and Pietro Leopoldo the city takes, finally, its actual urban physiognomy, extending the periphery along the coast and at the shoulders of the port, and building, in addition to the commercial are of the Venezia Nuova, also the works of public utility such as the Cisternone (Big cistern), necessaries to satisfy the needs of a population always more numerous.