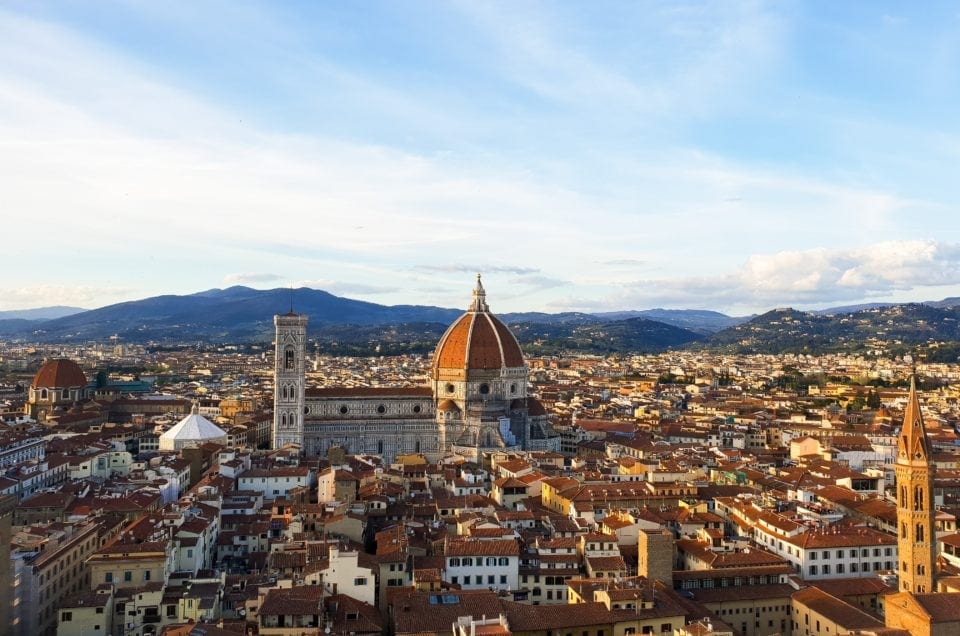 The name Florence, in Italian “Firenze“, is coming from the name of Fiorenza used during the period of maximum development of the city around the middle of the second millennium AC, which name, at its time, is coming from the latin word Florentia, the city built by the Romans.

The original inhabited centre of Florentia, founded during the spring of 59 BC, was located in a different position with respect to the antique Etruscan city, being strategically built in defence of a bridge used by the Roman colonies. Benefiting from an agrarian law dating back to the times of the Consulate of Cesar, the original village was transformed following the normal criteria of the military engineering of Rome in a rectangular map where the “cardo” and the “decumanus” are meeting at right angles in the central square.

The ceremony of official birth of the city took place at the same time as the Roman festivities of the arrival of the spring, the ceremonies in the honour of the Goddess Flora that were taking place from April 28th to May 3rd. These ceremonies were called “Ludi Florales”, in the honour of Floralia and from these came the origin of the name of the city.

In the story of Florence a central role is taken by the family of the Medici, under which hegemony the city knew its more glittering period. The Medici were prosperous wool merchants, that were also interested in the art of the exchange; they were holding a “bank”, that was lending conspicuous amounts to the nobility and to the clergy: the first bank of Europe, with branches in diverse cities of Italy and abroad.

However, they were opposed to other families, in particular the family of the Albizi who were fearing for their power, so that they faced the conspiracies that reached their top with the exile of Cosimo in 1433 AC; the year after, however, the new kings, who were in good dispositions regarding the Medici, decided to put an end to the exile of Cosimo, who came back to the city acclaimed by the people with all the honours. From 1434 AC for almost thirty years, the one who in the history of Florence will remain famous under the name of “Cosimo the Old”, was practically the effective “Lord of Florence” so that he ended up deserving the name of “Father of the Country”, even though he had never accepted any kind of political charge.

His son Piero handed the power for a period of five years only but he never managed to take care of the finances and the power was then transmitted to his sons Lorenzo and Giuliano, this last one dying because of a conspiracy implemented by the family of the Pazzi, rival of the Medici.

The Lord of Florence then became Lorenzo, who was called “the Magnificent” because of his magnanimity towards the people and because of the patronage he liked to demonstrate by welcoming in his court the men of letters and artists in general.

The years preceding the death of Lorenzo the Magnificent, which happened in 1492 AC, were characterised by the overbearing figure of public accusatory of the priest Girolamo Savonarola who, in his sermons, was praying for the implementation of a government of the people and who was hurling himself against the wealth of the nobles and the moral degradation of the clergy.

Another personage that needs to be named is Cosimo I, who in spite of his temperament of tyrant, knew how to govern with equilibrium having the merit, among others, to transform Palazzo Vecchio in a sumptuous palace and to extend the sovereignty of Florence on Siena and almost on the entire region, up to win the title of “grand duchy of Tuscany”, given directly by the Pope Pio V on August 24th 1569.

After the short and fruitless government of the first born child of Cosimo, Francesco I, the brother of this last one, Ferdinando I, arrived to the power and succeeded in the attempt of maintaining the circumspect political regime of the father padre.

During the following years the grand duchy lost little by little his power and influence on the Italian politics; after the sickly Cosimo II, after whose death the power fell in the hands of the mother and of the wife Maria Magdalena of Austria, the city of Florence took advantage of the initiatives and of the patronage of Ferdinando II, who, in addition to found the Academy of the Cimento and to give birth to the project of the Gardens of Boboli, also had the merit to welcome in his court Galileo Galilei.

Cosimo III, who governed from 1670 to 1723, led the city in an era of profound decadence during which, among other, died all the members of the Medici Family.

Between 1865 and 1870, Florence became the capital of the Kingdom of Italy; the request of space for the administrative offices, in addition to those necessary to welcome the government employees, valuable between fifteen thousand and twenty thousand units, rapidly worsened the question of the accommodation in such a way that it became necessary to expropriate the patrimony of the Church.