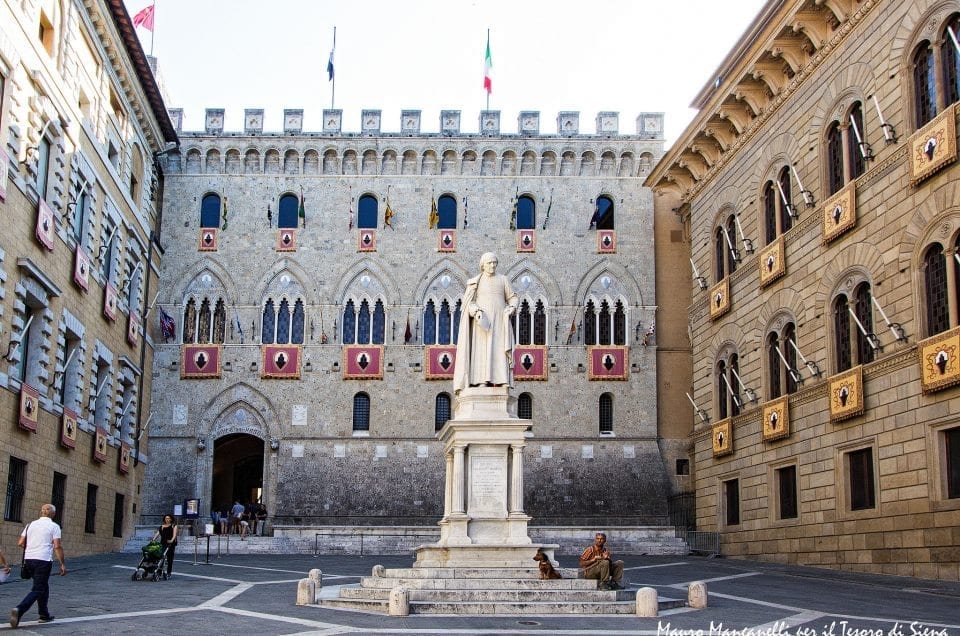 This rectangular Piazza is formed by three buildings and has in its center the statue of the archdeacon Sallustio Bandini, champion of economic freedom, who died in 1780. It is the work of the Sienese sculptor Tito Sarocchi who made it in 1882.
The central 14th century Palazzo Salimbeni, however, is the dominant feature of the piazza. In 1879 it was restored and enlarged in the neo-Gothic style by Giuseppe Partini.

This imposing building is the headquarters of Monte dei Paschi, one of the Italy’s principal banks. It was established in 1624 by incorporating the Monte Pio bank which had been founded in 1472.
The name Monte dei Paschi is derived from the Italian word pascoli, meaning pastures. The bank’s financial operations were guaranteed by the income from the pastures of the Maremma district, which at the time belonged to the state.
To the right of Palazzo Salimbeni is the Palazzo Spannocchi, built in the Renaissance style by the Florentine architect, Giuliano da Maiano in 1470, but completed with the façade in this piazza in 1880 by Giuseppe Partini.
Opposite is Palazzo Cantucci, built in 1548 by Bartolomeo Neroni who was commonly known as il Riccio.
You leave Piazza Salimbeni by a street named Banchi di Sopra and then take Via dei Rossi, on the left, to arrive in Piazza San Francesco.